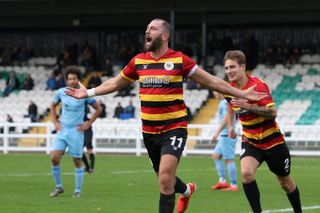 Adam Nowakowski has revealed his extraordinary gesture to be paid £1 a week is just his way of giving something back to Bradford Park Avenue.

The 32-year-old has agreed to play for the National League North side during the 2020/21 campaign for a nominal weekly fee to help them survive the financial implications of the coronavirus pandemic.

Nowakowski, who has spent his entire career playing in non-league, turned down offers of contracts at other clubs in order to stay with Avenue and take a “substantial” pay cut.

The utility player, who has another job as a sales rep for a food and beverage company, admits he does not need the money, but wanted to help out the club that means so much to him.

“I had quite a lot of clubs that contacted me about contracts for 2020/21 season, Bradford have been great for me over the years, and so has non-league, I have played at Harrogate and Darlington, some really good clubs, so I feel fortunate that I have managed to play semi-pro,” he told the PA news agency.

“My granddad, Trevor Foster, he played a lot of sport in Bradford, captained Wales at rugby league, played for Great Britain, did a lot of work for Bradford in the community.

“I have a real affinity with Bradford, going back to a club that is quite close to my family was really important.

“It was my idea, I came up with it. I approached the club and they said it was a great idea.

“I didn’t think it would get any attention, but I have been blessed with so many different messages. It is some positive news in a difficult time.”

Nowakowski is not wanting to be a trendsetter and insists he is not expecting any of his team-mates to follow suit.

He is expecting some banter from them, though, when the new campaign gets under way.

“It is not for other people do it because a lot of people need the wage, I am fortunate enough that I can afford to do this at this moment,” he added.

“It is not a message that every one should do it. A lot of businesses are suffering, it feels good to do something nice during a difficult time.

“It is substantial, it is thousands of pounds. Over a 40-week season it is a lot of cash, but it allows the club in an uncertain times to manage their books a bit easier.

“They can bring someone in if they need to, if they lose a sponsor it is some help there.

“I am sure I will get some stick in the dressing room when the season commences. One of the lads is an accountant and he said he will do my tax return for free this year, another one of the lads works at Starbucks and he said they will bring me a free flat white coffee on the coach for away games.

“Some of the words have been so kind from all over the world, it is quite humbling.”