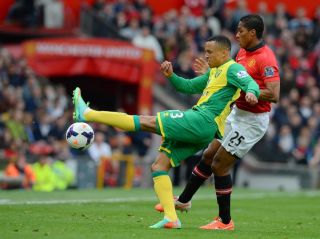 Wayne Rooney and substitute Juan Mata both netted doubles as United began life after David Moyes with a resounding 4-0 win at Old Trafford on Saturday.

The result marked a fifth successive loss for Norwich and a third since Adams took the reins in the wake of Chris Hughton's departure earlier this month.

Norwich will drop into the relegation zone if there is a winner in Sunday's clash between Sunderland and Cardiff City, and they must negotiate daunting matches against Chelsea and Arsenal to preserve their top-flight status.

"What we've got to make sure we do is give everything we've got in these last two games - two really tough games," Adams said.

"We're probably going to have to take points in each of the games. Maybe, I'm not so sure. We'll have to have a look at the results but what we have to do is make sure we give it our best shot.

"We've got to have a real good go at it and make sure we're maybe a little bit braver than we were today.

"I talk about bravery in the sense of not just physically but getting on the ball and making things happen. I didn't think we did that today."

Norwich imposed themselves on the contest effectively until Rooney opened the scoring with a 41st-minute penalty, after Steven Whittaker was adjudged to have fouled Danny Welbeck.

"I thought for 40 minutes we were looking okay," he added. "We didn't cause United enough of a problem but what we did do was quell the crowd - we said how important that would be today, particularly in the first 10 or 15 minutes with what's happened here this week.

"Our shape looked good. We looked solid and disciplined without overly causing United a problem.

"I'm not so sure how much of a penalty it was. I think it was minimal contact, maybe on the arm.

"But you're still in the game. The killer blow was the second goal.

"We didn't really learn our lesson from the previous week. I think (Raheem) Sterling scored a goal from a similar distance (for Liverpool) and we've just got to get closer and stop a player like that getting a shot away. After that it was really tough."