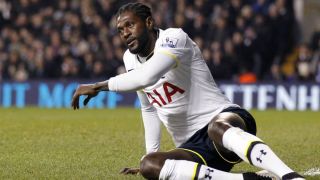 Free agent forward Emmanuel Adebayor has been warned he will not be able to command regular first-team football if he signs for Watford.

Hornets coach Quique Sanchez Flores, who continues to be linked with the striker, says he is aware why the former Real Madrid player is attracting strong Premier League interest.

But Flores warned Adebayor, 31, that he usually finds it hard to bring strike duo Odion Ighalo and Troy Deeney off the pitch during a match, never mind leave them out of his starting XI.

"I can understand why a lot of clubs in England want to sign Adebayor," said Flores.

"He is 31, he has quality, he has experience, he has goals. So I understand that he can choose where he wants to play in the Premier League.

"It is not easy to come here to cover Deeney and Ighalo. They have a high performance every time and they are part of the soul of this team. It is difficult to challenge these players, so we need to be sensitive.

"We need to explain to the players on what condition they are coming to this team. I don't want any players coming here to cover strikers that think they are going to play easily, because it is not the real situation.

"We play with two strikers but it is difficult to take them out of the team, including in the match."

Flores also expressed his anger after Ighalo had his goal in the 2-2 draw against Chelsea on December 26 taken off him by the dubious goals panel, who have altered the strike to a Gary Cahill own goal.

"It is unfair," said the former Atletico Madrid boss. "Ighalo's shot was on target, the deflection off the defender only changed the direction by this much [gesturing a tiny distance].

"It is strange. For me, it is not fair. So we have Ighalo with one goal less, when Cahill was trying to stop it? Fortunately, Ighalo is very strong and confident and it is not a problem for him."