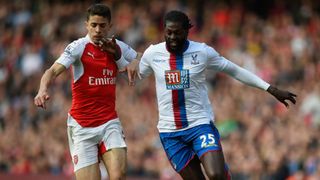 Emmanuel Adebayor says he finds the fact Arsenal fans booed him before he came on for Crystal Palace on Sunday funny.

Striker Adebayor has had a fractious relationship with the Emirates Stadium faithful since leaving Arsenal for Manchester City ahead of the 2009-10 season.

The 32-year-old then famously ran the full length of the Etihad Stadium pitch to celebrate in front of the visiting supporters when he scored for City against his former club just a few months later.

Togo international Adebayor has since played for the London club's arch-rivals Tottenham before signing for Palace on a free transfer in January.

Alan Pardew introduced Adebayor from the bench midway through the second half at the Emirates on Sunday and he set up Yannick Bolasie to score Palace's late equaliser in a 1-1 draw.

When asked about the reception he received from home fans, Adebayor – who scored 62 goals on 142 appearances for Arsenal between 2006 and 2009 – replied: "It is not my first time coming back to play against Arsenal at the Emirates.

"You can see when I was on the bench and warming up and they were booing me I was just laughing. I cannot say I'm used to it because it is not good to get used to this kind of stuff.

"For me, at the end of the day I have to be happy about where I came from and what I have become today – I have to forget about all the haters.

"All the Arsenal fans boo me and when I look back, I understand where everything went wrong, but there are certain things in life you cannot come back to anymore.

"But at the end of the day, it is funny, the weather was good, we were playing in London and 20 minutes from my house. I have to be happy. If I'm not happy, then something is wrong."