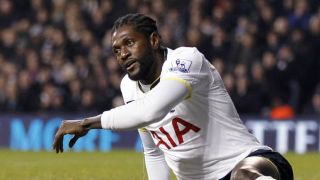 New Crystal Palace signing Emmanuel Adebayor has admitted he will have to do some research about his new club.

The Togo forward was unveiled by Palace on Wednesday, having signed a deal with Alan Pardew's team for the rest of the season.

But the former Arsenal and Real Madrid striker, who left Tottenham in September, admitted he does not know a lot about his new club telling reporters: "I don't know much about the club but it's better to learn so I'll be going on Google and finding out more about them.

"Whatever the team want to achieve I will follow them - I want to help them win games and that's what I'm here for."

Adebayor said he hopes to bring an element of cheeriness to the Palace dressing room as the club looks to push on from their current position of 11th in the table with 15 games to play this season.

"They're not far from the top five and that'll be difficult to reach as there are a lot of big games to play, but let's get out there, have fun and enjoy ourselves," he said.

His first action may come in the FA Cup, with Palace set to welcome Stoke City on Saturday.