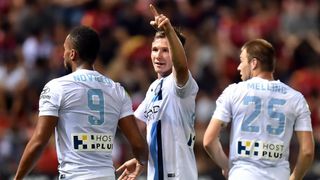 City moved up to second and within one point of Adelaide as Fitzgerald's maiden goal for the club in the 71st minute inflicted their opponents' first defeat since the 2-1 loss at Melbourne Victory on November 28.

Bruno Fornaroli – who scored a hat-trick against Sydney last weekend – almost put John van't Schip's team ahead inside seven minutes, but his header was deflected wide by the undetected arm of Iacopo La Rocca.

In a tight first half, Adelaide goalkeeper Eugene Galekovic was forced to make saves from Aaron Mooy and Fitzgerald to ensure his side went into the interval level.

Galekovic denied Harry Novillo from the edge of the area 10 minutes after the restart, but Fitzgerald broke through 19 minutes from time with a brilliant, curled finish into the top corner.

Bruce Djite was unable to salvage a point for Adelaide when his stoppage-time header missed the target, meaning just one point now separates the top four teams in the A-League, though Western Sydney Warriors and Brisbane Roar are still to play this weekend.