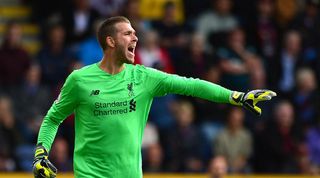 Liverpool's back-up goalkeeper Adrian insists he will not allow Alisson to "relax" despite acknowledging the Brazilian's quality.

Adrian deputised for Alisson when he suffered a calf injury at the start of the season, and has made 15 appearances in all competitions in 2019/20.

However, Alisson remains the undisputed No.1 at Anfield and is now widely regarded as one of the world's leading shot-stoppers.

Adrian says he full of admiration for his team-mate but has declared that he has not given up hope of usurping him between the sticks.

"It was a moment I was hungrily waiting for. Not so soon, though," he told BBC Sport of his debut against Norwich on the opening weekend of the season.

"Fortunately, I was both mentally and physically ready. I had to see it that way. It's never pretty when a team-mate gets injured, but only one of us can play.

"Alisson is peaceful, humble and deserves every single thing he has achieved. We spend so much time together, but still I'm here to fight. I won't just sit down on the bench and wait.

"He won the Champions League and the Copa America last year. He was the best keeper in the world. But he can't relax with me around. I've proved it."

And the Spaniard explained why he rejected the offer of a new deal at the London Stadium.

"I'd made a drastic decision not to stay any longer at West Ham, despite having a three-year contract offer on the table," he added.

"I hadn't played a single game all season in the Premier League. I didn't feel valued economically either, to be honest. It was tough for me.

"Summer came and then I felt those butterflies in my stomach. I knew something good was coming. I was already aware of Liverpool's interest before I received the first offers.

"They [Liverpool] called me at the end of July. They said that they'd sell [Simon] Mignolet if I gave the deal the green light. That's how it happened."

Liverpool travel to Carrow Road to face Norwich on Saturday.