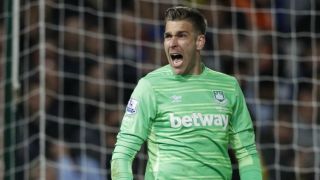 West Ham goalkeeper Adrian says he is excited for the campaign ahead as the Premier League club look to build on last season's seventh-place finish.

Adrian missed the end of last season through injury, but with the prospect of playing in the Olympic Stadium and West Ham looking to make a statement in the transfer market, he said he was as excited as ever to be at the club.

"I feel so proud to be one of the more experienced players in the dressing room," he told West Ham TV.

"This is now my fourth pre-season with West Ham United and I feel like an experienced player and I've been trying to help the new signings and to start working for the new exciting season.

"Of course we have a lot to look forward to. It was so hard to finish last season with a small injury because I like to play all the games, but it was a magnificent end to our history at Upton Park.

"Now we have an exciting new season in the London Stadium and everybody is waiting for the first game there."

The pre-season campaign did not get off to the best start with West Ham losing 3-0 to the Seattle Sounders in their first hit-out.

Adrian gave away the penalty for the first goal, but the keeper said he was not concerned by the result.

"We had a difficult result with the Sounders, but the most important thing is that the training was good for us and nobody got an injury and we are still getting fit," he said.