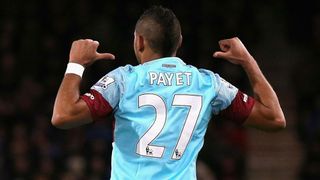 Stunning free-kicks from Dimitri Payet and Enner Valencia helped West Ham rally from a goal down to record a 3-1 win over AFC Bournemouth at the Vitality Stadium.

Frenchman Payet, starting for the first time since November 7, curled home a set-piece after 68 minutes to cancel out Harry Arter's maiden top-flight goal, then provided the assist for Valencia to put the visitors in front.

Valencia wrapped up the three points with a free-kick that bettered his team-mate's effort, the Ecuadorian's dipping attempt from a tight angle leaving home goalkeeper Artur Boruc rooted to the spot.

The comeback by Slaven Bilic's side extends their unbeaten Premier League run to a club-record eight games, while it also lifts them to within a point of a top-four spot.

Bournemouth, who fielded January recruits Benik Afobe, Juan Iturbe and Lewis Grabban, were made to pay for not taking their chances during the first half.

There was no sign of what was to come when the away side suffered a double blow in the space of two first-half minutes.

Soon after Andy Carroll was forced off through injury, Arter's right-footed drive from distance caught out Adrian to give the hosts the lead. The West Ham goalkeeper seemed to misread the flight of the shot, as it struck him on the wrist before going into the net.

Boosted by breaking the deadlock, Bournemouth created a plethora of chances to double their advantage.

Afobe – the only one of Eddie Howe's three recent signings to start - wastefully headed over from close range, while Adrian made a better job of dealing with left-back Charlie Daniels' crisp strike, getting a strong hand to deflect the effort away.

Junior Stanislas' well-weighted pass in behind West Ham's defence offered Afobe another sight of goal, only for the forward to leave the ball behind as he looked to round Adrian.

The missed opportunities nearly came back to haunt Bournemouth before the break, with West Ham twice denied by Boruc.

West Ham pushed their hosts back after the break, yet despite controlling possession and territory, they still needed a set-piece to draw level.

A free-kick on the left side of the area allowed Payet to curl an attempt over the wall and into the top left corner, the ball clipping the bar on the way in.

Just seven minutes later and the former Marseille man turned from scorer to provider, making the most of a slip by a Bournemouth player to wriggle free on the right and send over a cross that Valencia converted first time.

The victory was wrapped up when Valencia grabbed his second of the night, with a fizzing dead-ball effort appearing to take Boruc by surprise as it flew into the net at his near post as Bournemouth and their new faces failed to pull away from the danger zone.

- Harry Arter's goal was Bournemouth's first shot of the game.
- A league-high 26% of the Cherries' Premier League goals have come from outside the box (6 of 23).
- Eddie Howe's side scored for the first time in their last four top-flight games, thus ending their longest PL drought of the campaign (3 games).
- Dimitri Payet has scored or assisted more goals for West Ham this season (all comps) than any other player (six goals, five assists).
- Enner Valencia's goals were his first in his last 16 Premier League appearances.
- The Hammers have won eight points in the top-flight from losing positions this season – a haul only Leicester City (10) can better.
- Bournemouth have thrown away a joint-league-high 12 points from leading positions this season in the Premier League (along with Newcastle United).