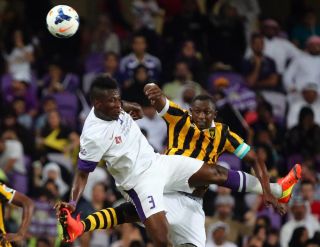 The competition's runaway top scorer netted his 12th of the 2014 Champions League to help Al Ain battle from behind to wrap up a 5-1 aggregate win and set up a last-four clash against Al Hilal.

Following a 2-0 defeat in the first leg – when Gyan was again on target – home side Al Ittihad needed to score first to have any hope of turning the tie around and did so courtesy of Ismail Ahmed's own goal after 36 minutes.

But Gyan drew the sides level four minutes later with a crucial away goal before Omar Abdulrahman and Diaky Ibrahim struck in the second half as Al Ain cruised to victory.

Al Ain had an early effort disallowed for offside and Jires Kembo-Ekoko was also guilty of missing two gilt-edged chances before the hosts broke the deadlock thanks to a huge slice of luck.

Marquinho beat his marker down the right flank and crossed to the near post, where Ahmed deflected the ball past his own goalkeeper.

Any hopes of an Al Ittihad comeback, however, were quickly extinguished as Ghana international Gyan produced a moment of magic.

Gyan controlled a lofted Miroslav Stoch ball, allowed the ball to bounce and then unleashed an unstoppable volley to make it five goals in his last four Champions League outings.

Another long ball caught the Al Ittihad defence out after 66 minutes as Abdulrahman raced clear before firing across Fawaz Al Qarni.

And Ibrahim made it 3-1 on the night seven minutes from time as Stoch beat the offside trap and squared for him to tap home.