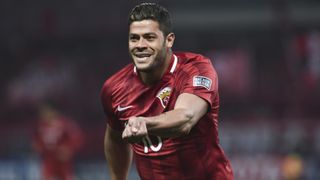 Hulk starred as Shanghai SIPG came from behind to beat fellow Chinese Super League side Jiangsu Suning 2-1 in the first leg of their AFC Champions League last-16 tie.

The forward scored one and set up another as SIPG won the home leg to earn a narrow advantage going into the return on May 31.

Jiangsu took an eighth-minute lead when Roger Martínez took advantage of a mistake from Cai Huikang to fire in a lethal finish.

But Hulk won a 32nd-minute penalty when he was fouled by defender Li Ang as he charged into the area and took the spot-kick himself, beating goalkeeper Zhang Sipeng with a low effort for his fifth goal in six Champions League games this season.

Hulk then showed superb skill down the right to cross for Odil Ahmedov to head in his first SIPG goal from six yards in the first minute of first-half stoppage time, which proved to be the winner.

There was one other match on Wednesday in the competition's East Region, Jeju United taking control of their tie against Urawa Red Diamonds with a 2-0 home victory.

Marcelo Toscano headed in Hwang Il-Su's cross from the right to put the Korean side ahead after seven minutes.

The Japanese visitors almost equalised when Yuki Muto had a header cleared off the line, but the tie took a huge swing in Jeju's favour in the 92nd minute.

After collecting a pass from Bae Jae-Woo, substitute Jin Sung-wook capped a slick counterattack to send a deflected effort in off the post.