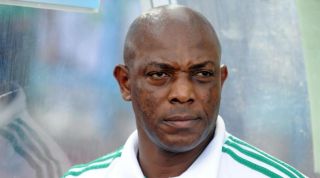 Shockingly, Nigeria sit bottom of Group A with just one point from their three games so far, and realistically must beat third-placed Sudan on Wednesday to stand any hope of progressing.

Coach Stephen Keshi hit back, claiming some are out to "sabotage" his team's chances, and urged Nigeria's supporters to get behind the players in Abuja.

By contrast, Group A leaders South Africa can all-but seal their place at Morocco 2015 with a win over Congo.

In Group B, leaders Algeria are out to maintain their 100 per cent record against Malawi, while Mali host Ethiopia, and Group C sees top-placed Gabon visit second-placed Burkina Faso and Lesotho play Angola.

Cameroon of Group D will be out to improve on Saturday's 0-0 draw in Sierra Leone when Johnny McKinstry's side visit Yaounde, with Ivory Coast and Congo DR facing off in the pool's other fixture.

Cape Verde Islands can cement their place at the summit of Group F with a win over their closest challengers Mozambique and Zambia entertain Niger, while Group G sees top two Senegal and Tunisia clash while Egypt play Botswana.