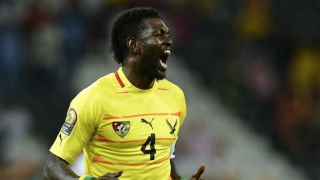 Togo striker Emmanuel Adebayor put his differences with the national team behind him, scoring the winner to earn his country a 2-1 success over Liberia in African Cup of Nations qualifying.

The Tottenham forward was axed from the squad to face Ghana in a friendly on Monday, after reportedly failing to report for the team's training camp.

Adebayor has since made up with head coach Tom Saintfiet, however, and his decisive strike in Sunday's Group A fixture can only have helped repair the relationship further.

Togo fell behind to William Jebor's effort three minutes before half-time, but Sadat Ouro-Akoriko equalised shortly after the hour and then Adebayor snatched the winner three minutes from time.

Cameroon were grateful to Vincent Aboubakar's last-minute effort for their 1-0 win over Mauritania which enabled them to go top of Group M, while Ghana had no such problems in seeing off Mauritius 7-1.

Asamoah Gyan and Jordan Ayew both scored twice for this year's beaten finalists, while the other game in Group H saw Rwanda claim a 1-0 win at Mozambique.

Seven-time champions Egypt were comfortable 3-0 winners over Tanzania as they got their Group G campaign off to a strong start - Rami Rabia, Basem Morsi and Mohamed Salah all finding the net.

In Group B, goals from Firmin Mubele and Joel Kimwaki earned Democratic Republic of Congo a 2-1 home success over Madagascar.

Ethiopia also prevailed by the same scoreline, Gatoch Panom and Saladin Said on target as they overcame Lesotho in Group J.

The game between Congo and Kenya finished 1-1, as did the clash involving 2015 hosts Equatorial Guinea and Benin.