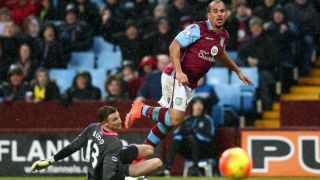 Remi Garde hailed the impact of Gabriel Agbonlahor after the striker's first Premier League goal of the season helped seal a 2-0 home win against Norwich City.

Agbonlahor had not found the net since March but he raced on to a throughball by Jordan Veretout to beat Declan Rudd and double Villa's lead after Joleon Lescott had opened the scoring with a header on Saturday.

Villa are still eight points from safety but their third league victory of the campaign closed the gap on 19th-placed Sunderland to just four points.

And Garde was pleased for Agbonlahor, the 29-year-old striker having started just nine of Villa's 25 league matches in an injury-hit season.

"He scored the kind of goal he likes to score, the ball behind the defensive line, a good ball from Jordan Veretout and then Gabby, he scored brilliantly on this occasion," Garde said.

"I have also to say that he worked very hard for the team for 90 minutes, like he did at the West Ham game.

"We have 14 games to go and hopefully Gabby will be the one to come and help the team to fight until the end.

"He was not available for me for a long time because of injuries. It was the main problem with Gabby.

"I'm pleased that he's back on the track, for the team and for us, and scoring was very important probably for him because I know when you are a striker and you are not scoring for a long, long time it's very painful.

"But it's not only about Gabby, it's about all the players around him and the team spirit."

Villa are at home to Liverpool in the Premier League next Sunday.