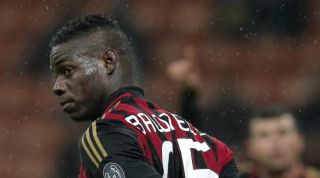 The Italy international is set to return to the Premier League after the Merseyside club agreed a fee - reported to be £16 million - with Milan and the 24-year-old is set to undergo a medical.

Liverpool boss Brendan Rodgers had denied that he was ready to make a move for the former Manchester City man when asked on a pre-season tour of the United States earlier this month.

But Balotelli's representative, Mino Raiola, suggested that the move has been on the cards since the end of last season.

He told Corriere della Sera: "The negotiations have been going on for three months. It's not exactly a scoop.

"Liverpool have always been the only English club who negotiated for Mario. I never lied to the media. Three days ago there was talk of Liverpool, but no offer. The truth is I've been working on Mario for months: the time had come to divorce from Milan.

"There wasn't any row, incident or change. It's not true that the rapport broke down with Milan. I was always against bringing Mario back to Italy: the pressure, the expectation, the media... playing in Italy is much tougher for him than abroad.

"He insisted that he wanted to go from Manchester City to Milan and between client and agent, the client always decides."