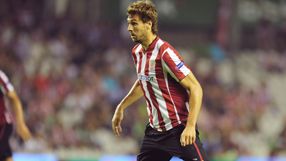 The powerful front-man was involved in a heated argument with head-coach Marcelo Bielsa on Monday before being expelled from training.

Llorente has less than 12 months to run on his current deal and is expected to leave for nothing once his contract runs its course next summer.

The 27-year-old came close to moving to the Serie A giants during the summer, but the move fell through as Juventus were unwilling to meet Athletic’s asking price.

However, his agent has hinted that a possible move to Italy in the New Year is a possibility, telling Corriere dello Sport: "In the summer he wanted to join Juventus but Athletic Bilbao did not want to sell him for less than his release clause

"Italy in January? Why not? It is a great championship and Fernando would like to play there. Juventus are a great team, but so are Inter, AC Milan, Manchester City and so on. We will see what happens."

Juventus general director Guiseppe Marotta has admitted that Llorente is the type of player that the Old Lady would be interested in signing.

"I think he is a top player that every year, regardless of our budget, we try to pursue," he said.

"With regard to the team, it is clear that [Antonio] Conte relies on certain tactical concepts, as well as a number of very versatile players, and Llorente fits this profile."