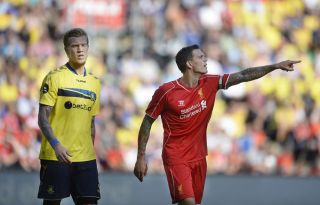 Agger struggled for consistent game time at Liverpool last season, making just 16 Premier League starts, and has been heavily linked with a move away from Merseyside.

Mamadou Sakho ended the season as Rodgers' favoured partner alongside Martin Skrtel as Liverpool went within two points of winning a first league title in the Premier League era.

Agger has since claimed he will not be happy playing second fiddle again this term, while Rodgers' pursuit of Southampton's Dejan Lovren has only fuelled speculation that the Dane's future lies elsewhere.

But speaking after Liverpool suffered a 2-1 pre-season loss to Agger's former club Brondby on Wednesday, Rodgers labelled the 29-year-old one of his top performers.

"Agger is one of the best players we have. He has been unlucky because he has been plagued by injuries last season," the 41-year-old manager told reporters.

"He is a good player, he is experienced and we can use that in the upcoming season."

The Denmark international played the first half of Liverpool's opening friendly of the pre-season at Brondby Stadion and Rodgers was enthused by his performance.

"Daniel has signed a contract with us [which expires in June 2016] and he showed in the first half, what an excellent player he is," Rodgers said.

A second-half stoppage-time goal from Ferhan Hasani saw Brondby overcome Liverpool, although Rodgers was missing a large chunk of first-teamers.

Daniel Sturridge, Raheem Sterling, Steven Gerrard, Simon Mignolet and Jordan Henderson were just some of the players not on the team-sheet for Liverpool, having participated in the FIFA World Cup.

Brondby's coach Thomas Frank was thrilled with his team's performance as they prepare for the new Superliga season but provided some hope for any Liverpool fans concerned by the defeat.

"Regarding going up in tempo, it was an excellent test for us," Frank said.

"Even though Liverpool were missing many of their big stars, everyone could see how fast they can play and it was therefore a really good test."