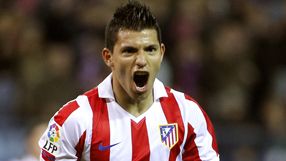 Tying the 22-year-old Argentina forward to the club was part of a policy of continuity that has also seen striker Diego Forlan and winger Jose Antonio Reyes extend their deals recently, the club said on their website.

GEAR:Save £13.50 on Atletico home shirts with Kitbag. Free delivery on orders over £50

Aguero, who has played for Atletico since 2006 and has a son with Diego Maradona's daughter Gianina, said on his website that he wanted "to continue making progress with the club".

"This is not merely putting a signature on a contract," he added. "It's also about renewing a commitment to the club at which I arrived when I was only 18 years old and I have been with for almost five years."

Atletico are sixth in the La Liga standings with 27 points from 17 matches, 19 behind leaders Barcelona, and were knocked out of this term's Europa League at the group stage.