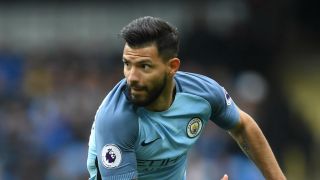 Sergio Aguero drew rich plaudits from manager Pep Guardiola after he inspired Manchester City to a 3-1 win over West Brom.

Argentina star Aguero was unable to add to his 31-goal haul this season but was instrumental in a slick first-half display as Gabriel Jesus and Kevin De Bruyne breached the visitors.

Guardiola has regularly asked Aguero to improve his all-round contribution to the City cause this season and the top scorer lost his first-team place to Jesus earlier this year.

The forward duo started together for only the second time and Aguero's link-up play illuminated the opening period, most notably when a deft backheel played in De Bruyne to set up Jesus' opener.

"Gabriel was amazing but I thought the key player in front was Sergio," said Guardiola on Sky Sports.

"He did not score but he made two or three assists. He played… wow, like for a long time I didn't see."

Third-placed City need a point at Watford to be absolutely sure of a top four spot on the final day of the season, although they also boast a better goal difference than Liverpool and Arsenal immediately below them.

However, Champions League qualification was essentially a subplot on Tuesday as the City faithful gathered to bid Pablo Zabaleta a rapturous farewell.

The two-time Premier League winner will end a celebrated nine-year association with the club at the end of the campaign and Guardiola added: "The crowd have stayed to say goodbye to a legend.

"Seeing people cry for him and what he has done… it was a perfect day, a special day for Pablo and he deserves everything."