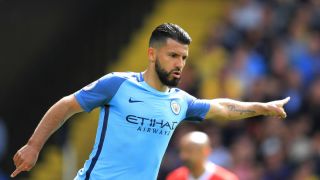 Manchester City have no intention of letting Sergio Aguero leave the club during the close-season, chairman Khaldoon Al Mubarak has declared.

The striker's future at City had been called into question with the arrival of Gabriel Jesus in January, the Argentina international relegated to the bench as Pep Guardiola opted for his younger team-mate.

Injury to Jesus offered Aguero another opportunity to showcase his talents and he duly took it, scoring nine goals in the final three months of the Premier League campaign.

Real Madrid have been linked with the 28-year-old but Mubarak insists City's star striker is very much part of the future at the Etihad Stadium.

"Absolutely [Aguero will stay]. There has never been any doubt about that," he told the club's official website.

"I've read a lot about the speculation on this and it's ridiculous. Sergio Aguero is one of the best players in the world.

"And we are a team that aspires to win in every competition we compete in – having Sergio Aguero as part of the squad is an absolute must. And it has never been in doubt."

Mubarak also hopes to tie down Yaya Toure to a new contract with the club, the Ivorian reportedly offered a new deal ahead of his current contract expiring in June.

He added: "Yaya has shown us this year again and again how he can contribute to this team, Yaya is one of the players that over the last six years has been instrumental to the success of this club.

"Pep has a lot of trust and confidence in him, so Yaya I hope will be with us, continuing this journey with us."