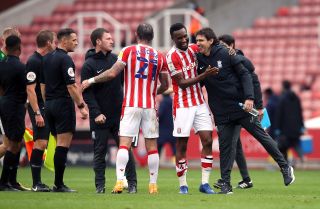 Birmingham boss Aitor Karanka admitted his team did not do enough to win the game after Sunday’s 1-1 draw at Stoke.

His shot deflected off Dean and denied the Blues a welcome win on the road, although Karanka’s resilient side stretched their unbeaten league run to four matches.

“Sometimes you can think it is a shame that we didn’t win the game, but it is true that today we didn’t create a lot of chances,” Karanka said.

“But the most important thing is one month ago we were at St Andrew’s after a defeat against Cambridge.

“Now we are unbeaten. We played against a very good team, we can’t forget that they were in the Premier League two or three years ago, with Premier League players and we were competing against them really well.

“So except the goal I can’t remember a lot of chances from them and I think we are in a good position.

“We now have two weeks to work at the training ground (during the international break) and to get rested because this month has been really demanding.”

Karanka added: “When you concede a goal after 85 minutes you can always think you should have won the game, it is true after the second half especially.

“At the end of the first half we didn’t have many chances, we were organised with our defending, but maybe with (Jonathan) Leko today on the bench it would have been different because with his pace we could get something more.

“We depend a lot on Jeremie (Bela) and Ivan (Sunjic) and we don’t have that pace to try and get in transitions.”

Stoke boss Michael O’Neill was equally frustrated his side did not make their domination pay.

Striker Steven Fletcher struck the angle of post and bar and also shot inches wide, but the home side needed Powell to cancel out Dean’s surprise opener.

“It’s a frustrating game today because we were well on top for the majority of the game,” O’Neill said.

“And then we gave ourselves a difficult task by losing the goal from a corner.

“It was difficult because we had to essentially break down a back five and four in front, which isn’t easy.

“But credit to the boys, they kept going and got the equaliser. We just couldn’t find a way to get another chance to win the game.

“These are games that, quite possibly in the past, we may have struggled a little bit or maybe lost.

“But today we kept going and the substitutions helped when they came on.

“We’re disappointed because we wanted three points and we wanted to go into the [international] break on the back of a win.

“We didn’t get that, so we’re a little bit frustrated at this moment in time.

“But the break comes at a good time for us. We’ve lost one game and we can pick up again against Luton in our next game.”