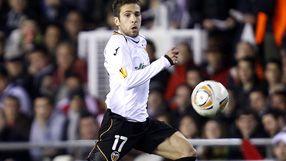 The 23-year-old has been in impressive form for Los Che this season and it had been speculated that Barcelona had already agreed a deal to take him back to the Nou Camp at the end of the season.

However, the player and both clubs denied the reports, but it hasn’t seen interest in Alba wane, with Manchester City and Serie A pace setters AC Milan also interested in the youngster.

And while admitting of interest from abroad, Vicente Fores, the player’s agent, has revealed that they have opened talks with Valencia about extending his contract with the Spanish outfit.

"We are conducting negotiations for a contract extension and I cannot rule out that we will reach an agreement soon," Fores told Tuttomercatoweb.

"Barcelona, as well as Chelsea and Manchester City and maybe AC Milan, have had contacts with Valencia, but personally I'm just talking with Valencia."

Alba has attracted interest across Europe having made 34 appearances in all competitions for Valencia, netting one and laying on a further four.