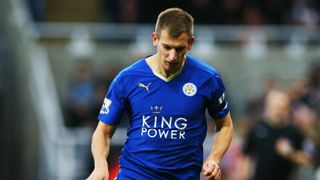 Not content with Leicester City's astonishing start to the season, Foxes winger Marc Albrighton is dreaming of winning the Premier League this season.

The Foxes, who were pre-season relegation candidates, are second in the table and behind leaders Arsenal only on goal difference after a stunning first half of the season.

Leicester look to continue their success when the second half of their league campaign kicks off with a home game against AFC Bournemouth on Saturday and Albrighton is aiming high.

Asked what one thing he would choose to have in football during 2016, he told BT Sport: "To win the Premier League.

"For obvious reasons it would be unbelievable. We will wait and see what happens.

"I have never been up there at the top of the table at this stage of the season with any team so I am enjoying every minute of it and long may it continue."

Manager Claudio Ranieri, though, remains reluctant to contemplate the possibility of winning the title, insisting that remains a target for bigger clubs than Leicester.

The 64-year-old said: "You would love it if I said 'we are champions' but no, I say 'we want to beat Bournemouth'.

"At the beginning of last season we were only talking about relegation, this season it is top of the league. So it is important to maintain the right balance.

"We can say 'start to win the title' but it is not our job, our job is to win the next match.

"The other [clubs'] jobs are to win the title. We have to fight for the next match and we want to win. That is our philosophy."