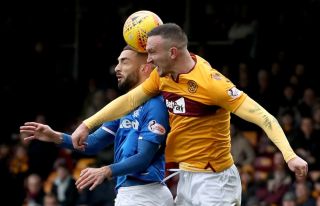 Tom Aldred has urged footballers from south of the border to rejuvenate their career in the Ladbrokes Premiership as he sets to bow out at Motherwell.

The 28-year-old defender ends an 18-month loan spell from Bury against Livingston at Fir Park on Saturday.

Aldred is out of contract and has attracted several suitors with an offer from Brisbane Roar in Australia reportedly on the table.

Aldred, who started out at Carlisle with spells at Accrington and Blackpool among several other clubs, has enjoyed the experience at the Lanarkshire club since first driving up “on a cold, wet January” and would encourage others to move north of the border.

He said: “I have an amazing 18-month period, started over 60 games for the club which is some good numbers but it is time for me to move on.

“It has opened up a window for me that probably wouldn’t have opened if I had stayed in England.

“Some of the offers are far afield which I am guessing come because I have been playing in the top league in Scotland. It is a lot better than League One and Two in England.

The Northern Irishman believes Aldred’s tale “epitomises everything we do in bringing boys up”.

He said: “He wasn’t playing in a League Two side and he was being given a little bit of stick.

“We brought him and he has now got a super opportunity to change his life. He is a massive success story for us.

“That is our model. We bring up players nobody else wants and we turn them into half-decent players and they can get life-changing experiences.

“Carl McHugh will leave too and we wish him all the best and Jake goes with our best wishes too.”