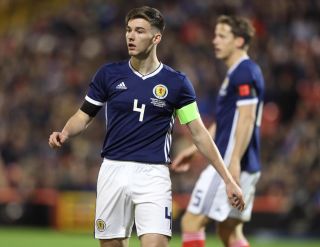 Scotland manager Alex McLeish admits he fears losing some of the rhythm of their recent triumphs after Kieran Tierney became the latest player to pull out of their Euro 2020 opener.

But McLeish hopes the much-criticised trip to Peru and Mexico last summer will pay dividends for Thursday’s contest in Kazakhstan.

Tierney failed to overcome the fitness issue which affected him during Celtic’s win over Dundee on Sunday and looks set to be replaced by Aberdeen captain Graeme Shinnie in the Astana Arena.

The 21-year-old was missing with a pelvic injury when Scotland overcame nine call-offs to beat Albania and Israel in November but he was the natural replacement for Liverpool left-back Andy Robertson, who missed the team flight after being told to undergo dental surgery.

McLeish is missing six of the players who started in both of the games which ensured Scotland topped their Nations League group, with Allan McGregor retired from international football, Callum Paterson and Ryan Fraser both ruled out because of the artificial surface, and Steven Fletcher and Ryan Christie injured.

The Scotland manager said: “Kieran has been ruled out of this game. We did a medical on him and he had a scan and he can’t be risked at this stage.

“It is disappointing to lose my captain Andy Robertson and also Kieran. It’s really bad luck because they are two fantastic players.

“But we are lucky to have a player of Graeme Shinnie’s quality, who can slot in in different positions. I don’t want to give you my team at this moment but he is certainly a candidate.”

McLeish added: “We want to try and get a little bit of familiarity in the set-up every time we name the squad. If you keep changing the team then you lose a little bit of rhythm.

“It doesn’t matter how good the players are that you bring in, if you get victories together and a set of players who know each other inside out then they get that momentum together, then that’s really important in any tournament, especially in these games coming up.

“Obviously there’s a few players missing from the last two games. Tierney, to be fair, didn’t play those games.

“But this is where the bigger squad comes into play and the fact we played games in Central America and South America last summer has helped us to get a good assessment on a lot of the other players that can be at Scotland’s disposal.

“We don’t want to keep changing the team every single international but I’m afraid it happens to all international teams. At this stage of the season players have played a long season and some are picking up injuries and also fatigue sets in at this part of the domestic football season.”

McLeish, who expects Aberdeen defender Scott McKenna to overcome a thigh strain, has selected Celtic midfielder Callum McGregor as his skipper in the absence of Robertson, who will join up with the squad in Italy on Friday ahead of Sunday’s game against San Marino.

“Over the past few years Callum has shown tremendous ability on the field but also he is a very good ambassador of football on and off the pitch,” McLeish said. “An unfussy player, nothing seems to bother him.

Callum McGregor training in the Astana Arena where he will lead out his country in Scotland’s Euro 2020 opener pic.twitter.com/PSJpUBLGs7— Gavin McCafferty (@GavinMcCafferty) March 20, 2019

“He is a great example to the rest of the squad in his professionalism and I believe the players will respond to Callum being the skipper for this one.

“He was delighted. It’s a great honour for any payer to play for their country but to be captain at some stage in your international career is a phenomenal honour.

“Callum will take it in his stride. He’s the type of captain who is not a snarling, biting captain, he’s one who will encourage the players and try and get the very best out his team-mates as well as doing his own job well.”