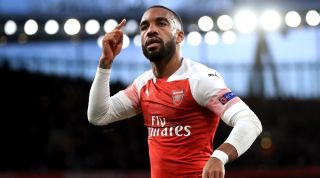 Barcelona will attempt to sign Arsenal striker Alexandre Lacazette this summer, according to The Daily Express.

The France international has enjoyed an excellent season in north London, scoring 13 goals and providing eight assists in the Premier League.

Lacazette was named the Gunners' Player of the Year last week, but this could be his final campaign at the Emirates Stadium if Barcelona get their way.

The La Liga champions have identified the forward as one of their leading transfer targets, with Ernesto Valverde keen to strengthen his attacking options ahead of next season.

The Catalans hope that a £70m bid will be enough to prise the former Lyon man away from Arsenal.

Unai Emery is keen to keep hold of one of his star players, but an offer of that size could prove too good to turn down.

Arsenal face Brighton on Sunday as they attempt to secure a top-four finish in the Premier League.