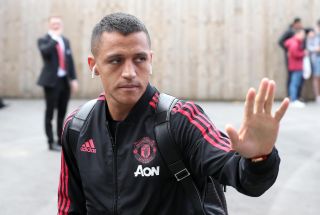 Manchester United forward Alexis Sanchez has insisted he has no regrets about his move to Old Trafford.

The 30-year-old, who has joined Inter Milan on loan for the rest of the season, scored just five goals in 45 appearances for United after arriving as their highest-paid player from Arsenal in January 2018.

The Chilean, earning a reported £400,000 a week, came in for heavy criticism, but told BBC Sport he remains glad he made the move.

“I’m very happy I went to Manchester United,” Sanchez said. “I’ve always said that. It’s the club that has won the most in England.

“When I went to Arsenal it was fantastic – I was happy there – but United were growing at the time, they were buying players to win something.

“I wanted to join them and win everything. I don’t regret going there.”

Sanchez scored 80 goals in 166 games for Arsenal after signing for £30million from Barcelona in July 2014, but suffered a major slump in form after joining United.

We can confirm that Alexis Sanchez joins Inter Milan on loan until 30 June 2020. We wish @Alexis_Sanchez the best of luck in Italy. pic.twitter.com/DdcRQRoEMk— Manchester United (@ManUtd) August 29, 2019

He scored two Premier League goals in 27 appearances and made only 31 starts out of a possible 77 for the club.

“I’ve always said to my friends I want to play. If they (United) would let me play I’ll do my best,” Sanchez added.

“Sometimes I’d play 60 minutes then I wouldn’t play the next game and I didn’t know why.”