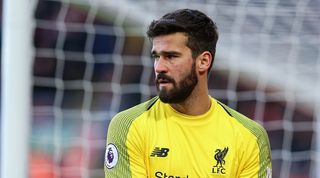 Liverpool goalkeeper Alisson Becker believes he and his team-mates have already become part of the club's history.

Jurgen Klopp's side enjoyed a superb 2018/19, winning the Champions League and amassing a club-record top-flight points tally of 97.

That was not quite enough to bring the Reds their first league title since 1990, but they did claim Europe's biggest prize for the sixth time with a 2-0 victory over Tottenham in the final.

However, Liverpool's season would have been very different had they drawn with Napoli in their final group-stage encounter.

Klopp's men hung on for a 1-0 win, with Alisson making a superb stop to deny Arek Milik an equaliser that would have almost certainly knocked Liverpool out of the competition.

And ahead of another meeting with Napoli at Anfield on Wednesday, the former Roma goalkeeper has reflected on one of the most important interventions of his career.

"They [Napoli] are part of the story of my career,” he told the Independent. “In March 2018, Roma had an away game in Naples and it was an awesome one for me as I made 11 saves in a big defensive performance, which is really important against Napoli.

“And then, here at Anfield, I think I put my name in the history of Liverpool with the save against them in a decisive match, an all-or-nothing moment, with our Champions League lives on the line. I put everything I had into that save and we put everything we had into that game.”

Alisson and his team-mates are now aiming to win back-to-back Champions Leagues for the second time in Liverpool's history.

The Reds are also in an excellent position to lift the Premier League title, and Alisson admits he did not expect so much success this early in his Anfield career.

“I imagined it would be great, but not all so quickly,” he said. “I came here in the right moment when the team were already in the middle of the right way. I got a good seat and have enjoyed the view.

“We want to keep it going. We’ve become part of Liverpool history, but that’s not enough, we want to give more to the club and the fans.

“We are fighting really hard for the Premier League and for the Champions League again. We know it’s very tough, but we want to do everything possible to achieve these goals.”

Napoli are the only team to have beaten Liverpool this season – but now they're falling apart. Where has it gone wrong?