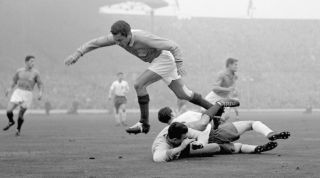 “But white shirted England are determined that this won’t be a draw.”

Search in the right places and there’s a whole nest of Pathé News videos to uncover. Their football library is particularly rich and afternoons can be lost trawling through their FA Cup Final archive, watching players sip tea in the Wembley dressing-rooms or tightening garters before kick-off.

It’s quaint footage, but compelling and affecting. In 1953, the FA Cup Final would be broadcast live for the first time, signalling the dawn of a new relationship between football and television, but Pathé’s footage of the day is still the more three-dimensional, even in its supercut form.

That’s true for the England internationals played prior to 1966, too. The notorious 6-3 defeat to Hungary can be found online in its entirety, but it's in its four-minute form and with Bob Danvers-Walker’s theatrical narration that Pathé really brings it to life and convey the gravity of what's taking place.

The newsreel from November 27th 1957 should be just another instalment. England had secured their qualification for the 1958 World Cup back in May, winning a three-team group with Denmark and the Republic of Ireland. It left them filling the gaps around the Home Nations tournaments with friendly games and that brought France to Wembley at the end of the month.

How has Raul Jimenez turned into a success for Wolves – despite all the red flags?

It wasn’t just a preparatory exercise; England had wounds to heal. Three weeks earlier, they’d lost at home to Northern Ireland for the first time since 1914, falling to a 3-2 defeat. The public were subsequently in the mood for something comprehensive and reassuring and The FA’s Selection Committee responded, restoring Tom Finney to the side in place of Alan A’Court and replacing Derek Kevan with a 24-year-old debutant, West Bromwich Albion’s Bobby Robson.

England would win 4-0. Two from Taylor, including a fabulous near-post header, and two from Robson. Job done, pride somewhat restored.

It’s obviously unusual to commemorate a friendly, more so one in which nothing of any great significance happens. But then that’s entirely the point, because Pathé’s cheerful coverage and orchestral soundtrack couldn’t know what was about to happen.

Three months later, three members of Walter Winterbottom’s starting XI would be dead. Byrne and Taylor would perish in the Munich, in the air crash involving the Manchester United team travelling back from a European fixture. Fifteen days later, Edwards – his legs and ribs fractured, his kidneys damaged beyond repair - would lose his fight for life in hospital, passing away at the age of just 21. This was the last time any of them played for England or appeared at Wembley.

MUNICH REMEMBERED Manchester a City United, then and now

The effect, looking back now, is of an occasion loaded with unwitting poignancy. Like one of those terrible photographs which records the last seconds before a catastrophe. Broadened beyond the Munich sub-text, though, the footage also preserves all these fragments from within what became very significant footballing lives. Those characters all peer out from this game.

There’s Bobby Robson, of course, at the highest point of a playing career that his wonderful achievements in management would overshadow. Robson had such coaching longevity and his legacy extends so far beyond the dugout that, for younger generations, it’s hard to imagine him even kicking a ball, let alone for England.

There’s Don Howe, too, getting twisted into a knot and flummoxed to the floor by Maryan Wisniewski in the second half. Howe would become one of the sharpest coaching minds of his generation and the tactical architect behind Wimbledon’s FA Cup win in 1986 and also Terry Venables’ England.

Tom Finney and Johnny Haynes are icons of English sport, of course, with the statues to prove it outside Deepdale and Craven Cottage. There they are, having their way with the match and painting the occasion with their vibrant colours.

Wolverhampton station is 10 minutes from Molineux and the walk takes you past the Billy Wright pub in the town centre, and then up to the stadium which now wears his name on its main stand – sitting above the Wolves club museum, which is almost a personal tribute to what he achieved. And Blackburn Rovers fans will know that Ronnie Clayton and Bryan Douglas, who got a hat-trick of assists that day, are remembered at Ewood Park in much the same way, with stands named in their honour at opposite ends of the ground.

On the one hand, it was a game that nobody really cares to remember. On the other, however, it captures an England team in a very unusual situation. At last light before the Munich tragedy that claimed 23 lives the following February – but also at a specific moment in time, before all the careers contained would veer off in their different directions, leaving their marks and memories around the country. It creates this tremendous sense of lives still to be lived, with the knowledge that nearly everything we know these players - these people - for, is still yet to happen.

COMMENT Andy Mitten column: Chris Smalling is in the form of his life at Roma – and could still return to Manchester United’s defence

QUIZ Can you name the 50 most valuable players in the Champions League in 2019/20?