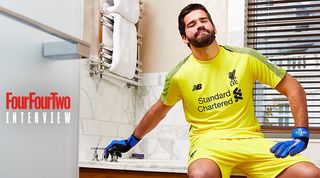 The Reds’ hopes of claiming a sixth European Cup were thwarted by holders Real Madrid, though they were ably assisted by two gaffes from the German keeper.

Manager Jurgen Klopp acted swiftly amid calls to recruit a top-class custodian, spending £67 million to sign the Brazilian from Roma, and has been rewarded with some stellar displays to help a free-scoring Liverpool side tighten up at the back.

Alisson had to sit and watch Liverpool’s Kiev catastrophe from home, having lost to his future employers over two legs in a goal-laden semi-final with the Giallorossi.

However, the 26-year-old admits he took no enjoyment from seeing a fellow member of the goalkeepers’ union struggle on club football’s grandest stage.

Speaking exclusively in the February 2019 issue of FourFourTwo, out in shops on Wednesday, Alisson says: “Even when my team scores after a big mistake from the opposition keeper, it’s a different feeling for me. I don’t celebrate it like any other goal.

“I know what goes through the mind of a goalkeeper in those kind of moments. I was so sad to see what happened to Karius – it could have happened to anyone.”

Read the full interview with Alisson in the February 2019 issue of FourFourTwo. A goalkeepers special, we also speak exclusively to Gianluigi Buffon, Jan Oblak, Jordan Pickford, Dino Zoff, Claudio Taffarel and Jan Tomaszewski. Plus, we hear from Helmuth Duckadam on his penalty-saving heroics for Steaua Bucharest in the 1986 European Cup Final, meet 92-year-old River Plate legend and goalkeeping pioneer Amadeo Carrizo, and trawl the history books to find the maddest of the mad.