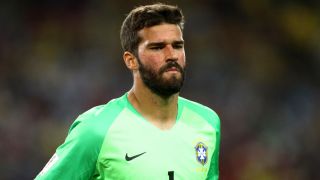 Alisson will link up with Liverpool at their Evian training camp, manager Jurgen Klopp has said.

The Brazil international became the world's most expensive goalkeeper when he moved from Roma in a deal that could rise to £65million.

Having been given time off following the World Cup, Alisson has missed Liverpool's tour of the United States and will not link up with his new team-mates until the end of the month.

Fellow new arrival Xherdan Shaqiri will fly out to America for International Champions Cup duty, however.

"Shaqiri will come the day after tomorrow directly to New Jersey and Alisson will come with Roberto Firmino and will be a part of the second camp in Evian," Klopp told Liverpool's official website.

"That's good that we'll have them all together, apart from the semi-finalists of the World Cup."