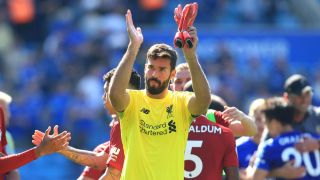 Liverpool boss Jurgen Klopp conceded an Alisson error was inevitable and insisted he had no problem with the goalkeeper's blunder in the win at Leicester City.

The Brazil international was the chief culprit for curtailing a run of three successive clean sheets with his self-inflicted mistake in the second half of Saturday's 2-1 success.

Retrieving an errant Virgil van Dijk pass, the 25-year-old dallied on the ball and was easily dispossessed by Kelechi Iheanacho, who squared for Rachid Ghezzal to reduce the deficit.

The howler gifted the Foxes a way back into the contest but, having last week applauded his new signing's confidence on the ball, Klopp claimed he was not overly concerned.

"We all have to learn from that. Not only [Alisson]," the Reds boss told Sky Sports.

"It was clear last week it will happen one day. I didn't think it would immediately happen the next week.

"I told him the best game to do it was this one because we won it. It's all fine. Now we have ticked that box as well – don't play all the balls to Alisson.

"He was cool after it when the crowd tried to make him a bit nervous, which is of course normal. That's how it is. No problem with that."

"It's very important to score for the team. We just try to do our best for the team. We played some good football, but the attitude made the difference as it was a very tough game for us" - Sadio ManeSeptember 1, 2018

Liverpool, who earlier established a two-goal cushion through Sadio Mane and Roberto Firmino, steadied after the setback to maintain their perfect start, marking the first time they have won their opening four Premier League fixtures.

"If somebody would have told me four weeks ago you have 12 points from four games I would buy it, whatever goal difference you want," Klopp said.

"Having 12 points and knowing you can improve is good."