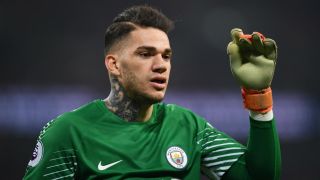 Manchester City goalkeeper Ederson accepts Liverpool shot-stopper Alisson is "one step ahead" of him to be Brazil's first choice.

Alisson, 26, has been the South American giants' number one, making 32 international appearances, while Ederson has played just once.

However, the City man will get another chance in a friendly against Saudi Arabia on Friday before Alisson takes the spot in a meeting with Argentina.

Ederson, 25, described Alisson as a friend and said the Liverpool goalkeeper was slightly ahead of him with the national team.

"I think there is a lot of similarity between the two of us. He is having a very positive season start at Liverpool," he told Globo Esporte.

"Here, he is one step ahead of me, he played in a World Cup. Brazil is well served with goalkeepers. Those who enter will do a good job.

"Representing the Selecao is a very great expectation, being able to play is even greater.

"I've had lunch with Alisson when he arrived at Liverpool. We have a very good relationship. He's a friend."

Ahead of the Copa America in Brazil next year, Tite plans to test several players as the nation look to win the tournament for the first time since 2007.

That means Ederson will get his chance in one of Brazil's two friendlies this month.

"Tite called me to talk to Alisson and [goalkeeping coach Claudio] Taffarel, and it happened that I would play the first game and Alisson the second," he said.

"I was very happy to have an opportunity to play a match with the Brazilian team. He passed on the idea, said it was a new cycle starting for the Copa America and would try to test as many players as possible."