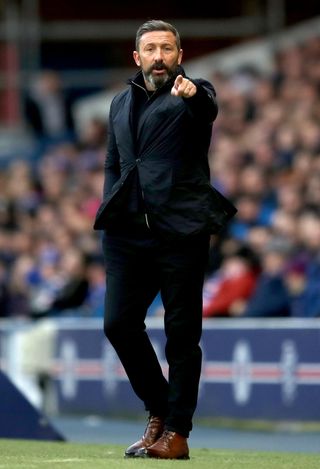 Aberdeen and Kilmarnock have it all to do again after their wind-affected William Hill Scottish Cup fifth-round tie ended goalless.

The home side had the better of the play, and the chances – especially in the second half – with Laurentiu Branescu the busier of the keepers, but Derek McInnes will be ponderous after a fifth straight game without a goal.

The wind ensured the first half was not of the highest quality, with most of the chances coming from set-pieces, and indeed in the first three minutes Matty Kennedy won a free-kick on the right, and Dean Campbell’s delivery had to be punched clear by Branescu.

Killie responded immediately with Alan Power driving from midfield before slipping in Eamonn Brophy, who angled a shot just past the far post from eight yards.

Aberdeen were next to threaten when they won successive free-kicks after 12 minutes, the second of which saw Niall McGinn curl a low effort round the wall, but only into the side netting after Kennedy was brought to down on the edge of the box.

McGinn sent a free-kick on the half-hour narrowly over the head of Scott McKenna at the back post, and then a half-cleared corner saw a similar outcome from Campbell’s cross – though the young midfielder would perhaps have been better to shoot himself.

With the scores level at the break, it was the home side who started the second period with more purpose, with Lewis Ferguson’s strong run ending with Branescu saving his shot for a corner.

Though the delivery was half-cleared, Sam Cosgrove was pole-axed on the edge of the area, and with the wind now forcing the ball to be held in place for set pieces, McGinn fired well over the bar.

The Dons made a tactical switch on the hour as Curtis Main joined the fray in place of Shay Logan, but Kilmarnock threatened shortly after, with Rory McKenzie’s effort held at the second attempt by Joe Lewis.

And with 10 minutes left, Brophy again found space on the edge of the area as he got away from Andrew Considine, before firing well over from just inside the area.

Aberdeen threatened again from a set-piece after Power brought down Ferguson 25 yards out. McGinn floated a cross toward the back post, but it caught in the wind and Branescu had to dive back in the direction he had come to save in the centre of the goal.

Main had a chance just as the game entered injury time, as he collected another wind-affected free-kick before hitting over from a tight angle, though Branescu looked to have got a touch.