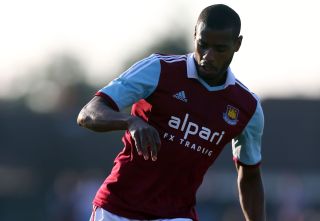 Vaz Te spoke out on Thursday about his frustration at a lack of first-team football and suggested he was going to submit a transfer request.

Allaradyce confirmed he had received a request from the player to quit the club and will let Vaz Te leave if his valuation is matched.

The West Ham boss revealed the Premier League club have not received any bids for the 26-year-old Portuguese forward, but expects interest before the transfer window closes on Monday.

"He might leave now, if anybody's going to leave now it would be Vaz," he said. "You don't keep anybody that doesn't want to stay.

"We've had no offers yet but I'd expect that we have an enquiry for him in the next couple of days.

"If he wants to leave, he can

"But the offer has to be right for us."

Vaz Te made his first start of the season in the midweek League Cup victory over Cheltenham Town and he scored. However, it was Ravel Morison - who also got on the scoresheet - who drew the plaudits from Allardyce.

"Ravel's performance on Tuesday was a carry on from his pre-season and we were all delighted with it, particularly the goal," he added.

"With six (goals) in pre-season and another on Tuesday it's making a real statement.

"From a midfield point of view it's Kevin Nolan, Mark Noble, Mo Diame....watch out."