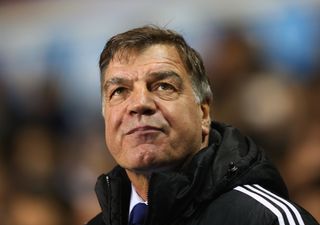 West Ham reached the semi-finals of the competition for the second time in four seasons with a 2-1 victory over London rivals Tottenham on Wednesday night.

Goals from Matt Jarvis and Modibo Maiga secured the win at White Hart Lane, but Allardyce knows his side will have to spring a major surprise if they are to get past City in the last four.

Manuel Pellegrini's side have scored 75 goals in all competitions this season and booked their place in the semi-finals with a 3-1 win at Leicester City on Tuesday, and Allardyce is aware it will be a tough ask for West Ham to reach their first League Cup final since 1981.

"The big disappointment is that we have Manchester City in the semi-final," he told the club's official website.

"Away from home they haven't been too clever, but at home they've been scoring an average of four goals a game.

"You never know and we'll go and give it our best shot, but we want to see more performances like that and pick up more points in what is the main priority for us - the Premier League."

Both legs of the semi-final will take place in January, with West Ham travelling to the Etihad Stadium for the first leg.