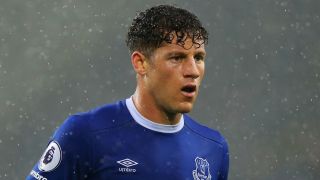 Sam Allardyce expects Everton to receive an approach for Ross Barkley this month and feels the club are resigned to losing him, but the manager has no intention of allowing Yannick Bolasie to leave on loan.

Barkley is out of contract in June and could leave on a free transfer at the end of the season.

One of the 24-year-old's suitors, reported to include Tottenham, could opt to secure his services by agreeing a reduced fee with Everton in this window, though.

And Allardyce knows bids could soon be lodged for the England international, who was said to have pulled out of an August move to Chelsea during his medical with the Premier League champions.

"I would expect there would be [an offer] sometime in this window if there's going to be interest from one of the big boys," the Everton boss told a news conference ahead of Friday's match away to local rivals Liverpool in the third round of the FA Cup.

"I think the club was resigned before I got here that they were going to lose Ross. I can't see that changing."

Allardyce also revealed he had to allay the fears of Yannick Bolasie's agent amid rumours the winger, who is finally back in action following a long-term knee injury, could be sent out on loan.

"That speculation creates massive problems for all managers," he said.

"It's very disconcerting, particularly for a player if he hears that message.

"It's ludicrous to think we're going to let him go on loan. That's what we have to deal with. Hopefully by the end of January we'll have got some business done and we'll be a stronger squad for it."

Of Bolasie's fitness, he added: "He's way ahead of where he should be. [But] he shouldn't be starting yet."