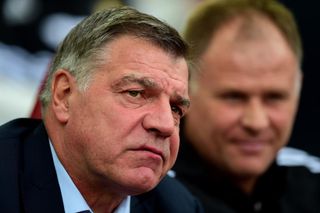 West Ham are fourth in the Premier League, having won four of their opening eight matches playing an attractive brand of attacking football.

Allardyce gained promotion to the top flight with West Ham in 2011-12 and only agreed a two-year extension late in the following season, once the club had secured its Premier League status.

That deal is set to expire at the end of the current campaign and although the former Blackburn Rovers manager is yet to be offered fresh terms, the 60-year-old insists the situation does not worry him.

"The conversations are the same as what they were in the first year in the Premier League," he said.

"We'll see how the season progresses, when the time is right. If it has progressed to a certain level that they want to offer a new contract, that's fine.

"At my age it doesn't particularly worry me a great deal. Contracts are made and broken in the entire football industry. It doesn't mean anything like it used to. A long or short contract doesn't protect you.

"It's a winning culture you need, if you continue to win you improve the club. It's a slow process you have to go through, you build something that's sustainable. It looks like in year four we are doing that.

'We've grown the squad into what looks more sustainable. The only way to do that is to get results. Eleven managers left jobs out of 20 [Premier League clubs] last year. The industry is impatient. Only way to stop that is with results."