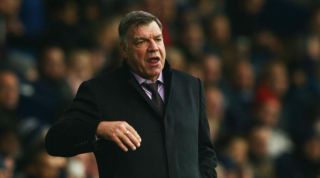 West Ham won twice at White Hart Lane last season and looked set to secure victory at the home of their London rivals once again when they were in command courtesy of goals from Cheikhou Kouyate and Diafra Sakho.

Allardyce's men had chances to extend their lead further in an impressive display at the end of a week of frenzied speculation over the 60-year-old manager's future and they were left to rue not killing the game off.

Danny Rose pulled a goal back with a scuffed strike nine minutes from time and Harry Kane snatched a point with the last kick of the game with he tucked in the rebound after Adrian had saved his spot-kick.

Kane's penalty was awarded after he went down under a challenge from Alex Song and Allardyce felt the experienced midfielder should have kept his hands to himself.

He said: "You've got to win it when you've got in the position to win it.

"That's why we've slipped into the position we're in. Had we taken full advantage of the leads we have taken, we would be sitting in sixth or fifth position in the league, maybe even better than that.

"Rather than our deficiency I thought it was more good fortune for Tottenham. The first goal was a complete mishit, when it bounces over the goalkeeper after its hit the floor.

"It's so unusual that sort of thing happens and it sneaks in the corner. It lifts the opposition and from our point of view, Alex has to keep his hands off him, because he's going to feel that contact and take to the floor.

"He's got to, it's no one's doubt that when you're losing at that stage of the game you know you're not going to score because he's kicked it too far.

"You're going to take the chance and the referee gives him the opportunity to take the penalty and he wasn't good enough to score that, but lucky enough to get the rebound.

"It all ends up with being very unlucky, but on the penalty if we'd have just kept our head a bit, we'd have seen out the result. It was a great performance, but not a great result."