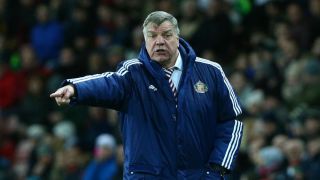 Sam Allardyce has urged his struggling Sunderland side to hold their nerve in Saturday's crucial Premier League encounter against Aston Villa.

A run of five straight defeats has left Sunderland 19th and seven points adrift of safety heading into the new year.

Villa travel to the Stadium of Light also in desperate need of three points having won just once in the opening half of the campaign.

While both teams will have 18 matches after Saturday's game, the encounter could prove crucial in the battle to beat the drop, and Sunderland manager Allardyce says his side must be brave to earn three points.

"We must hold our nerve because this is going to be one nervy affair on Saturday," he said.

"The game is so big that we all have to hold our nerve and give ourselves the encouragement that if we can perform at the very best level that we hit against Liverpool, but are a touch better in the final third, we will beat Aston Villa on the day.

"Hopefully we can hold our nerve - both the players and fans can help."