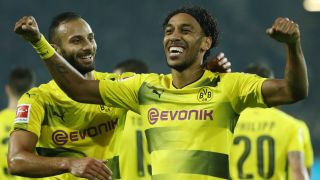 Everton boss Sam Allardyce has refused to rule out making an audacious bid to sign Pierre-Emerick Aubameyang from Borussia Dortmund.

A report in The Mirror claimed the Premier League club are ready to offer £60million for the striker, who is said to be unsettled at Signal Iduna Park, in January.

Any deal for the Gabon star would represent a spectacular coup for Everton, given that Real Madrid, Liverpool and Paris Saint-Germain are among the clubs to have been linked with the forward in recent months.

Allardyce confirmed he is keen to land a striker who can provide the same goal threat as Romelu Lukaku, who left for Manchester United in the previous window, and would not deny interest in Aubameyang.

"It's the hardest thing to recruit: a centre-forward who scores goals," he said.

"Is he the right type of centre-forward for you? It's the most expensive area of the pitch. We have a number of players here with good goalscoring records who haven't perhaps settled.

Asked if Aubameyang was the player he wanted, he replied: "I'm not telling you."

21 - Liverpool have scored 21 goals in the Champions League this season, the most by an English side in a single CL group campaign. Prolific. December 6, 2017

Allardyce takes his side to Anfield on Sunday for the Merseyside derby, having watched them win three games in a row in all competitions without conceding a goal.

However, he accepts Everton's very best might not be enough against a Liverpool team who thrashed Spartak Moscow 7-0 this week.

"It's two clubs clashing with great history, it has an atmosphere that's unique to the city and unique in derby terms," he said. "It's about us handling that pressure and handling a team that's probably in the best form since Jurgen [Klopp] arrived.

"It's one of the best strike forces available in the Premier League that we certainly have to master before we think about if we can get at Liverpool and get into the right areas to score a goal.

"We know that we probably won't have as much possession as Liverpool on Sunday, but what possession we do have, we have to make sure we use it in the right manner. When we get a chance, we need to score, we need to be very clinical in our finishing.

"That interchange of movement, the runs they make, their skill with the ball, and also their finishing. They've got goals all around the front line now. We've got to try our very best to cope with that.

"The whole occasion is a great test for our players. However good Liverpool are playing at the moment, it's a derby match, anything could happen.

"All I can ask the players to do is give it their best. It still might not be good enough against Liverpool."