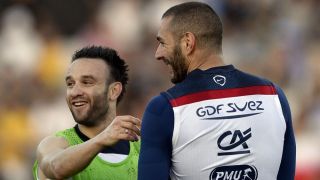 An alleged copy of a telephone conversation between Karim Benzema and his friend Karim Zenati has been released, in which the Real Madrid striker reportedly tells fellow France international Mathieu Valbuena "if you want the sex tape to be destroyed, come see my friend in Lyon".

Benzema was charged by a court in Versailles last week with complicity in an attempt to blackmail and participating in a criminal conspiracy as part of an investigation into an alleged plot to extort money from Lyon midfielder Valbuena.

The case is ongoing - Valbuena is yet to speak to investigators - while Benzema's agent, Sylvain Cormier, has protested his client's innocence and said the France striker is "absolutely calm and beyond reproach".

L'Equipe and Europe 1 on Wednesday released what they claim is a transcript of a conversation between Benzema and Zenati on October 6 in which the former says he told Valbuena: "I'm here to help matters. You need to see this guy. He will come. He will speak to you.

"I am with the French national team until Sunday. If you give me your number, I will give it to my friend. He will come to see you in Lyon. It's your life but I warned you eh?

"I am helping you. Look, I don't give a s***, it is not me. I came to see you. If you want the video to be destroyed, come see my friend in Lyon. You see him directly and you speak with him, you send nobody."

Benzema then reportedly tells Zenati: "He said to me: 'What do they want?' I said to him: 'I do not know. My aim, my thing ends here, you see, my train ends here. Now my friend (Zenati), he takes the matter up. He is the guy who knows the person, there is only one person who has your video. I do not know him but my friend, he knows him.'

"There you go, I said that to him [Valbuena]. After that I do not know what he will do. He will call his agent, he will say that they have the video. I said to him, listen, there is no intermediary, no lawyer, no friend, no agent, no police, it's not what you want."

Cormier also suggested the media have not released the full transcript and have omitted key information.

"The press have information from an ongoing investigation. Who is giving them that information and why?" said Cormier, who also rued the fact "snippets of the conversation [were] carefully selected to be shown to the public".

He added: "During the conversation...Karim Benzema declared that he had told Mathieu Valbuena not to pay. This declaration apparently does not interest anybody."

Another of Benzema's legal team, Alain Jakubowicz, told French TV station BFM on Monday that the case is getting the 27-year-old "down" but that he will continue to fight to clear his name.

Jakubowicz said: "Karim is down and feels that he has been singled out. He is being dragged through the dirt and wants to fight for his dignity."

Regarding the leaks to the media, he added: "Someone is feeding the press. In best cases to inform, in the worst case to damage the reputation of Karim Benzema. We will not stop until we find out who is behind all this."