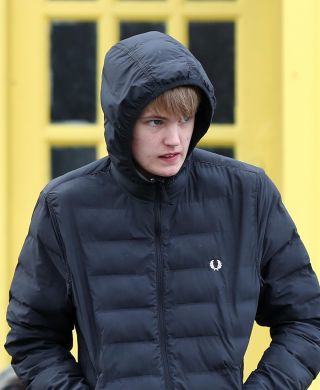 Nathan Higgins, 19, allegedly targeted the player with racially aggravated insults during a game between Burnley and Brighton and Hove Albion on February 9.

Together with his father, Stewart Higgins, 53, the teenager is also accused of hurling homophobic insults at home fans during the game at Brighton’s American Express Community Stadium in East Sussex.

When confronted about their behaviour, Stewart Higgins dismissed the words as “banter”, Brighton Magistrates’ Court heard.

Student Nathan Higgins and engineer Stewart Higgins, both of Talbot Drive, Burnley, Lancashire, appeared at the court for trial on Tuesday.

Higgins’ father Stewart Higgins is charged with using threatening or abusive words or behaviour likely to cause harassment, alarm or distress.

Both defendants deny the charges against them.

Prosecutor Dominic Dudkowski said that witness Nicholas Ball was sitting near the two defendants in the stands during the match and overheard “offensive words”.

He continued: “He heard Stewart Higgins, the father, shouting the word ‘benders’ on several occasions toward the home fans.

“The witness then described the son also shouting the word ‘benders’ a lot towards the Brighton fans.”

When Mr Ball confronted the pair about their language, the father told him to leave them alone.

The court heard that Stewart Higgins told him: “Mind your own business. It’s just banter, we’re not racists.”

The pair were interviewed by police at the match and then subsequently charged.

During the match, Mr Bong was said to have been subjected to boos from opposition fans after a previous racism row with Burnley-born West Brom striker Jay Rodriguez.

Mr Rodriguez was accused by Mr Bong of racially abusing him during a Premier League game in 2018, leading to an FA charge for the striker.

The FA declared the charge to be “not proven” against Mr Rodriguez.

Jay Rodriguez, who was born in Burnley, re-signed with the Clarets in July this year.