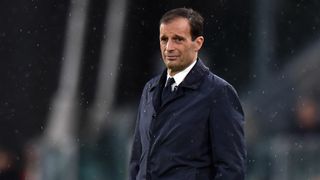 Massimiliano Allegri was pleased with the way Juventus dealt with the occasion of Cristiano Ronaldo's home debut against Lazio, although he insists it will take time for the champions to settle.

Juve were busy in the transfer market, bringing in Ronaldo, Joao Cancelo and Emre Can among others, while also sealing the return of former favourite Leonardo Bonucci.

The Bianconeri have not been wholly convincing in their first two wins of the season, but a 2-0 defeat of Lazio satisfied the coach as he continues to see progress.

"It was a different game to Verona [a 3-2 win at Chievo on the opening day]," Allegri told Sky Sport Italia.

"At first, we played in a hurry. There was a danger of getting carried away with the enthusiasm of Cristiano Ronaldo's first home match. We had to be patient.

"But I'm happy with how the players did. It was an important match, the first match against a direct rival.

"We need to work and improve. But we have Cancelo, who is a new player, Bonucci returned after a year, Ronaldo, a new player, that's 30 per cent of the team. It takes time."

On Ronaldo, he added: "Italian football is completely different to Spanish football. Ronaldo understands that and he is settling in very well. He's a very humble guy and I'm very pleased with the impact he has made so far."

Miralem Pjanic signed a new five-year deal with Juve this week and he was delighted to celebrate with a fine opening goal.

"I am very happy to remain at this wonderful club," he said. "I dedicate the goal to the fans, my team-mates and the club.

"I have improved so much in recent years and it is thanks to my experience here. I thank everyone for their support and help."