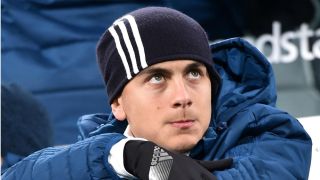 Paolo Dybala is "extraordinary" and has huge potential, according to Juventus coach Massimiliano Allegri, who agrees with the club's vice-president Pavel Nedved that the forward needs to focus on his football.

Dybala has endured a difficult run of form after a flying start to the campaign, with the Argentina international scoring just twice since September.

Juve icon Nedved - winner of the Ballon d'Or in 2003 - told Dybala to resolve issues in his personal life and focus on performing on the pitch, the 24-year-old having been benched for the Derby d'Italia draw with Serie A leaders Inter.

Dybala has long been considered a future Ballon d'Or winner and Allegri, who suggested the striker could be a substitute again for Sunday's trip to Bologna, hailed his potential.

"Rather than criticising Dybala, I would call Nedved's words 'tips'," Allegri said at a news conference.

"He is a vice-president who has played football and there's some advice there.

"Dybala is an extraordinary boy but he is not even 24 and has great room for growth... You just have to train and stay focused.

"It is difficult for Dybala to play [Bologna], but he is certainly available. Also, I still have to choose whether to play with two or three central midfielders.

"Juventus need the best Dybala and as soon as possible we hope to have that back."

Juve will be without Gianluigi Buffon - fourth in this year's Ballon d'Or vote – as well as Giorgio Chiellini and Juan Cuadrado for the trip to the Renato Dall'Ara, while Marko Pjaca has been included in the squad.

Allegri confirmed Alex Sandro will start for the champions although defenders Stephan Lichtsteiner and Benedikt Howedes will be others who miss out due to injury.

"Miralem Pjanic could start - he is fine and has trained all week," Allegri said. "Cuadrado will return against Roma [on December 23] and Chiellini should be back in the week. Buffon is still being evaluated for a calf problem.

"It's great news to have Pjaca back in the squad for this weekend. Pjaca has given great life to the Primavera. On Friday, even without him, on the wave of enthusiasm the boys won again.

"Alex Sandro is better physically, but above all better mentally. He will start and I am convinced he will have a great performance. Daniele Rugani or Andrea Barzagli will play. I have three central defenders available."