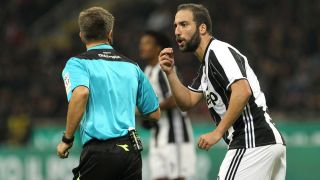 Massimiliano Allegri has defended the form of €90million striker Gonzalo Higuain ahead of Juventus' Serie A clash against his old side Napoli.

The Argentina international joined the champions in July in a record purchase for an Italian club, but he has struggled to hit the kind of form he enjoyed last season, when he scored 36 goals to break Gunnar Nordahl's 66-year record.

Higuain has seven goals in 13 appearances this term but has failed to score in his last four games in all competitions for Juve, a drought stretching back to October 2 against Empoli.

Allegri, however, was full of praise for the manner of the 28-year-old's adjustment to life in Turin ahead of a meeting with his old club at Juventus Stadium.

"I'm delighted with the way Higuain has started the season. His overall play has been very good," he said. "He's scored seven goals, he's calm and I'm pleased with what he does in attack and defence.

"Napoli fans are grateful for what he did for them, and he with them for the support he had."

Napoli could close to within a point of league leaders Juve with a win, but Allegri has denied Saturday's game could prove vital to the outcome of the title race.

"Tomorrow's match comes at a time when we can't call it decisive," he said. "The first games are never decisive - the return ones are.

"A year ago we lost to Sassuolo, and we know how it turned out after that. As history has shown, championships are decided from March."

The former AC Milan coach was keen to praise the work of Maurizio Sarri during his first year at the San Paolo, however.

"I congratulate Sarri because he's created a team that play some of the very best football. They don't have a clear reference point in attack so it won't be easy for us," he said.

"We have to be very brave and not allow them to counter-attack, which is their strength. It'll be a tough match."

Allegri confirmed Claudio Marchisio and Patrice Evra could sit out the match, which comes just three days after a 4-1 win over Sampdoria.

"We'll be assessing Marchisio today. He has no problem with his knee but there could be a risk to the muscles after 72 hours. After such a long absence, we have to be careful with him," he explained.

"Evra has taken a hit in the calf, we'll assess if he's available or not. We'll see with [Juan] Cuadrado - we only have two strikers available and he could be a third."