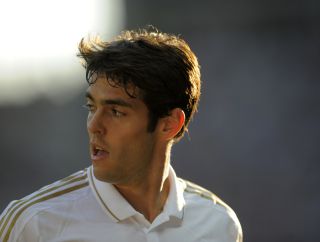 The Brazil international enjoyed a magnificent spell with the Serie A club between 2003 and 2009, picking up both the Ballon d'Or and FIFA World Player of the Year awards.

Milan picked up one Serie A title and lifted the UEFA Champions League with Kaka at the heart of their attack, before a then-world-record move to Real Madrid.

However, the 31-year-old has struggled to nail down a regular a spot under several managers at the Bernabeu with current boss Carlo Ancelotti, who brought him to Milan, admitting the Brazilian was seeking a move.

With Milan vice-president Adriano Galliani seemingly giving the deal the green light on Saturday, the move would be welcomed by Allegri, with the 46-year-old feeling that Kaka could still offer a lot to the side four years on from his departure.

"Kaka would make the team stronger because he has great quality and is also a player we could do with. Having champions in the side is always a bonus," he said.

"His arrival would boost the confidence of the team and the fans. I am confident the club, Silvio Berlusconi and Adriano Galliani have every intention of keeping Milan at the top level.

"In tactical terms, Kaka could play as a trequartista in this side, or as one of the two who flow around the centre-forward."