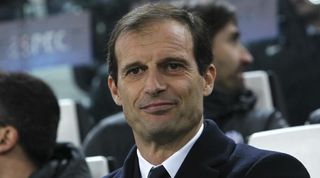 On Saturday the Italian champions meet Palermo knowing a win will put them 14 points clear at the summit, while Wednesday sees Juve head to Germany with a 2-1 advantage and an eye on the quarter-finals.

"[This week] will probably be almost decisive for the Serie A title, which we haven't already got in the bag like most people like to say,"Allegri said.

"It will also be decisive in the Champions League, because everything will be decided in 90 minutes. We must think one game at a time.

"On Saturday we'll have a game at Palermo which will be quite complicated for us. The fans will do everything they can to make our life difficult, given that Palermo is in quite a good position on the table.

"They will be able to play freely, in front of a packed stadium. Playing against Juventus always gives our opponents a certain kick.

"Palermo has built its success at home, they'll be extra excited to face us there - 26 of their points have come from home games, so we'll have to work extra hard to come out with a result.

"From Sunday, we'll think about the Dortmund game, and then after that to the Genoa game, before a few days of rest. But this one will be the decisive week for both Serie A and the Champions League."