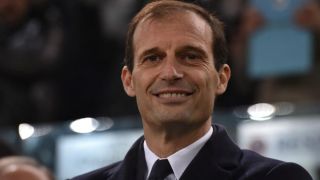 Juventus have not achieved anything yet, head coach Massimiliano Allegri insisted after his side beat Lazio in the Coppa Italia quarter-final on Wednesday.

Stephan Lichtsteiner scored the only goal of the game against his former club in a repeat of last season's final to set up a two-legged semi-final against Inter.

But despite Juventus stretching their winning streak to 11 domestic matches, Allegri told Rai Sport: "We must keep our feet on the ground and be aware we've achieved nothing yet.

"It will be a wonderful semi-final, you have to face the biggest clubs to reach the end, but right now we are focused on this weekend's meeting with Roma."

Allegri made a series of changes to his side, with Paulo Dybala, Mario Mandzukic and Gianluigi Buffon all rested, but the coach insisted he does not rotate his squad.

"I compliment the lads, as this was in no way an easy match," he added.

"I don't like the term 'squad rotation' as I have a very competitive team and it is always difficult to leave players out.

"Simone Zaza did well, Alvaro Morata improved in the second half and Martin Caceres worked very hard, which is important because we need him.

"To go forward in three competitions we need the entire squad to be in good physical and psychological shape."