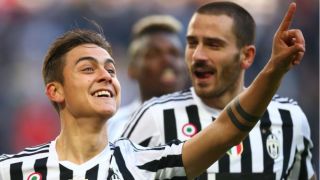 Massimiliano Allegri was pleased to see his Juventus players show no signs of rustiness as they returned from the mid-season break with a routine 3-0 Serie A victory over Verona.

Juve had not played since December 20 but were comfortable winners thanks to goals from Paulo Dybala, Leonardo Bonucci and Simone Zaza.

The result stretches the Bianconeri's winning run to eight league matches and, as they continue to surge up the table, heaps more pressure on early pacesetters Fiorentina, Inter and Napoli.

"The boys did well to immediately get back into the swing of things after the break," said Allegri. "It’s never an easy task.

"We weren't particularly sparkling, especially at the beginning, but we didn't allow our visitors a sniff.

"We're back amongst the chasing pack. The title winners will be the team that makes the least mistakes."

As well as opening the scoring, Dybala provided the assist for Bonucci's second - a thumping header from a left-wing free-kick.

"Paulo Dybala's got a real hunger to achieve his targets and works his socks off," added Allegri.